Food For Us is on the move… 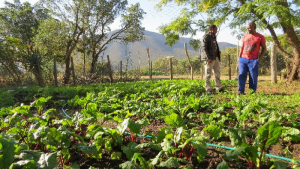 Vegetable garden of a participant farmer

The UNEP sponsored surplus food redistribution application project,  Food For Us, has had a busy last few weeks with the project being officially launched at the beginning of August.

This project aims to develop and trial a mobile phone application in South Africa which contributes towards the alleviation of food insecurity, transformation of markets and aids access to nutritious food in a country where significant food loss occurs on-farm.

The workshops created a space for participatory, co-engaged app design. Farmers and users all contributed ideas on how the application should be designed. They detailed the functions that they wanted to app to have. For example, they asked for a chat space, and for indicators for organic produce. And some were interested in a donation function. 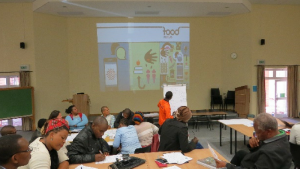 The Rhodes University workshop attracted a large number of small scale emerging farmers from the Raymond Mhlaba area which helped to highlight the needs of small scale farmers in the Eastern Cape and how the application could deal with these needs.

Suggestions from the workshop were recorded and later discussed with the application developers. This has informed a revision from ‘Version 0’ to ‘Version 1’, which is now being field tested.  To support the testing, a series of training workshops were held, again in the Eastern and Western Cape.

Here the app users were guided through the use of the application.

These workshops, although much smaller than the initial workshop, were beneficial in making direct and personal contact with the participants and introducing them to a tangible version of the application.

Participants trying out application during September workshop in the Western Cape.

The highly anticipated Food For Us application is scheduled to go live on Monday the 18th of September. We look forward to updating you on further progress thereafter. For more information on the Food For Us project, please visit the project’s website, which has also just been launched, and like the facebook page!  http://foodforus.co.za/ .