THE MATTER OF CONCERN:

Reclaiming sacred natural sites in the context of the Bale Mountain complex with communities.

Dialogues took place between community leaders, key government offices including Culture and Tourism, Land administration and Environmental Protection and administration and MELCA-Ethiopia. These dialogues have been used to surface tensions and conflicts between contesting interests. Some of these contested interests were between: expansion of agriculture and protection of SNS; traditional belief systems and Islam and Christianity; conservation of biodiversity and use of natural resources for livelihoods. As reported above, the dialogues resulted in mutual understanding of these contested realities and reaching at a mutually accepted solution.

In addition, the participatory mapping methodology has provided a crucial representational mode for communicating and generating local knowledge of landscapes. 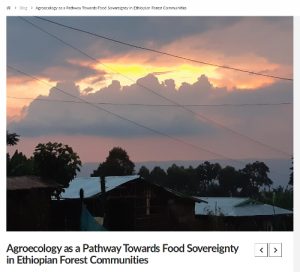 Mapping Majang – cultivating a resilient food future for the people of the forest, Ethiopia

Is transformation on the Horizon?