Between the 20th and 24th of January, 2017, the Colombian T-Learning team conducted their first transition lab in the Indigenous pueblo (town) of Atanques, Colombia. Nestled in the foothills of the Sierra Nevada mountains, the pueblo of Atanques represents geographically and metaphorically the bridge between the ancestral worlds of the Mamos (wise men) who live deep in the indigenous reserve, and the modern world of development.

This ancestral-modern bridge presents a key focus of the Colombian T-learning project which is based on mapping, analysing and ultimately promoting T-Learning processes within bioregional sustainability networks in Colombia. Initial mapping has shown a plethora of initiatives addressing a wide range of nexus concerns such as territorial rights (bioregion Caribbean), food sovereignty through permacultural projects (coffee bioregion), and educational projects based on endogenous concepts of the good life (buen vivir) in the central bioregion of Bakata. These initiatives are connected through the sustainability network of C.A.S.A. Colombia (the Council of Sustainable Settlements in the Americas), who hold a yearly gathering called El Llamado de la Montaña (the Call of the Mountain).

An acknowledged challenge by the network C.A.S.A., however, is the lack of articulation and sharing of experiences and outcomes taking place in community initiatives in Colombia and abroad. Earlier research by members of the Colombian T-Learning team has shown these initiatives promote types of experiential and transformative learning, which address structural barriers to sustainability (see Chaves et al 2016). The question which brought the T-Learning team together, therefore, was how to upscale these transgressive learning experiences both in practice, as well as disseminating experiences to wider audiences. 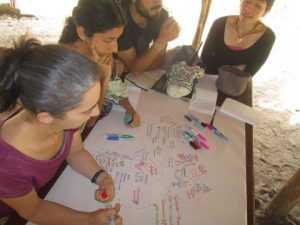 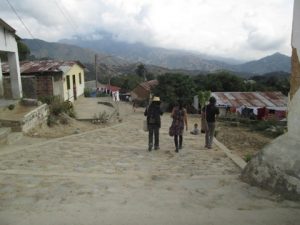 The overall idea we developed together during the four-day T-Lab was to design and put into action bioregional T-Labs led by each bioregional representative of the Colombian project. Each T-lab will involve diverse local actors and resources, focusing on local nexus challenges. An important part of these labs will be to harvest the learning processes, which take place during the T-Labs, and share these during the yearly national gathering El Llamado de la Montaña. It was also decided that the experiences and methodologies of the bioregional T-Labs of 2017 be systematized, and developed into an educational program, which will be piloted in the form of a MOOC (massive online open course) in 2018. The special characteristic of this MOOC is that it will be part virtual, but also part presential, where participants explore content online, but will also experience real-life examples by living for set periods of time in what we envision as community ‘classrooms’ in the communities providing the T-Labs. 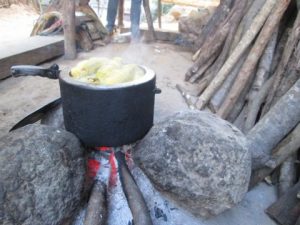 To finish this short report, we would like note the importance of conducting our T-Lab in the community of Atanques. Through team building exercises in the amazing natural surroundings, to the importance of being part of the local realities of the community – cooking on an open fire, laughing with locals, and witnessing first hand people throwing rubbish in the river – a form of empathetic understanding developed not just between members of the team, but also, perhaps, with the local community. This type of experiential learning, coupled with encounters with otherworldly people and ideas we perceive as fundamental in the learning journey towards more sustainable worlds. The next step on our roadmap is conducting the first bioregional T-Lab in the coffee region, from which we are confident further theories and practices of T-Learning will flourish. The Colombian team wishes you an inspirational good day!
admin2018-07-04T08:42:12+00:00