There is a wide range of local and regional coalitions in The Netherlands today, working towards re-designing systems and influencing the well-being of people and planet. These initiatives are often referred to as being part of a transition movement. Within this movement there are a variety of nexus points which are focused on. One of these is sustainable food systems which concerns circular, fair and sharing-based economies, their intersection with energy use, affordable and humane healthcare, improving the health of communities through food and nutrition.

Participants represent the worlds of (urban) farmers, food preparation, nutrition, food banks, living room restaurants, food artists, etc. Sustainability transitions require the involvement of multiple actors representing different societal spheres. They also require space for experimentation under ‘realistic’ economic conditions: local businesses and workers do require some kind of compensation. Nevertheless, the initiative can be considered ‘not-for-profit’ as capital accumulation is not the aim; generated income is used to sustain the whole, and surplus is invested in the organisation and its purpose.

The Foundation has three main lines of interests and (transformative) learning: 1) transforming food systems towards sustainable food systems (which you could see as main overarching purpose), 2) circular economy and new concepts of value creation, and 3) new ways of organising (experimenting with participatory leadership, expressive change, holacracy, sociocracy, among others), which it considers critical for systems change. 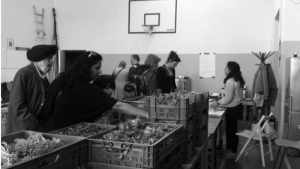 The foundation is not a professional organisation, but rather a vehicle for facilitating activities and gathering resources needed to bring about desired changes in the whole food chain towards creating a sustainable food system. One of these resources is the gymnastics hall, a physical space used to bring people together. The pooling of brain power to write local innovation grant proposals or to find ways to engage the local community more actively are other examples of the foundation’s functions.

In 2016 the Foundation hosted a number of activities and events:

A local designer was asked to facilitate a process, involving all stakeholders, that would lead to the design of a multi-functional space and different future scenarios for the gym as a breeding ground for local activities and activism around food and sustainability. One of the ideas is to involve a local vocational school in the renovation of the gym: students will do much of the work supervised by a local contractor. Presently the idea of creating a StadsLab (CityLab) as an arena for experimentation where different models and tools for interaction and collaboration are used to create healthy and localised food systems and ‘the next economy’ is being developed. The CityLab idea is a concept supported by the City of The Hague and therefore can potentially receive financial support – if the gym could be a hosting site for such a Lab then the City is likely to become an active supporting partner. 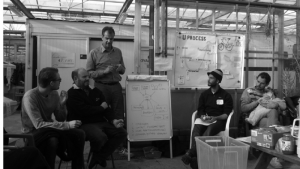 Arguably, the Local Food The Hague Foundation is helping somewhat disconnected local people and groups who share common interests and values connect and form a transition-oriented movement. In 2017 the foundation will embark on a number of concrete activities to remain visible and viable, including: starting a cooperative food store to be run out of the gym. Organising cooking workshops in the gym but also in different locations in the community, collective purchasing from local farming combined with the local fresh markets and creating sales nodes in local environmental education centres and city farms (The Hague historically has had city farms or children’s farms as they were originally called in most neighbourhoods), collaboration with local organic farmers where the farmers host urban dwellers to show them how they work but also to allow them to be in a quiet place where they can experience the ‘value and values of the land’, community (film) evenings with food and community-oriented films, speakers and dialogues, opening up floor space to other local groups that share similar values, but work in different contexts or on different issues (such as window farming course, permaculture/nature farming groups, health and well-being).

The figure below is a sketch of the Foundation’s current activities and relations. The Gym / CityLab are at the centre, the circles represent the different overlapping activities.

The foundation is gathering momentum and gaining interest, but is also looking for continuity, expansion and a healthy form of consolidation without becoming too structured and formalised. For instance, the foundation is in the process of buying the gym from the city of The Hague who presently owns the gym. Pressing questions are around viable plans for funding the needed renovation and sustaining the gym with the community. Is the community strong enough to crowd-source? Are loans needed? Where to find sponsors? One decision has already been made: all this cannot be organised on a voluntary base, and two part-time organisers for the renovation of the gym and community-building were appointed.

Key questions for the foundation are: How can continuity be created in creating discontinuities (here breaking away from unsustainable food patterns, systems and economies) without being co-opted by forces that tend to bring things back to normal and business-as-usual? How to make this location a ‘open’ space which invites people to take initiative, to collaborate in communities, not limited by the issue of money, i.e. how to create an environment and organisation that ignites the ‘inner spark’ of community members and keeps that alive in the long run? How to ‘hold’ this space in a sustainable manner?

In 2017 the T-learning project probably can link best with an initiative called CityLab Local Food The Hague, which seeks to articulate and design a range of sustainability oriented transitions at the local level in ways that lead to expansive learning and growing traction. 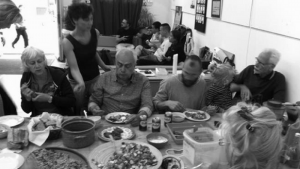 The importance of having a meal together in creating social cohesion