[1]
-Learning network; Pathways[2] and Acknowl-EJ[3] that began functioning as networks researching on transformations to sustainability in the face of climate change in 2016. In her keynote address, Susie Moser, Senior Advisor to the ISSC’s Transformations Programme identified the purpose of global transformations networks as ‘life for people and for the planet’. 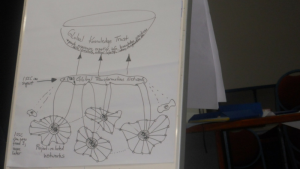 Each TKN participated in the transformations in practice-focused Transformations2017 Conference in August-September in Dundee. On one hand the research involves identifying reframing problematic social ecological issues in context, co-developing practical solutions and alternatives with the affected groups of people, and reflecting on the intervention research. One the other hand, the research draws on research-in-context to generate inter-institutional, inter-country and transdisciplinary expansive learning that culminates in the development of potentially useful conceptual, methodological and theoretical insights for wider sharing.

It is these emerging insights that TKNs came to share at Transfomations2017, mostly through five-minute speed talks and subsequent reflection-oriented discussions. For example, the four-member T-learning network team at the Conference presented four speed talks, drawing on the work of its nine members in nine countries from four continents. Two were pitched at country level – Ethiopia and Vietnam and one at regional level: southern Africa. The main T-learning network talk highlighted the emerging understanding of transgressive learning as:

A form of transformative learning which seriously challenges the taken for granted, that which has become normalised. It involves innovative strategies to engage with cognitive, social, economic and environmental justice leading to a substantive change in social practice, structure, norms or social justice.

The understanding resonated with the point made by South Africa’s Kimu Naidoo during his keynote address at the Conference, when he said systemic change involves bold and tenacious “challenging immoral conventions and orthodoxies.” The T-learning talk also underlined that the concept was not yet well-developed and needs to be given meaning in context. Methodologies that support transgressive learning are still under-developed, varied, and have different foundational assumptions which can be contradictory. Developing such methodologies requires in-depth, reflexive contextual and theoretical engagement in and across case contexts. The presentation of these insights, which were drawn from the nine members of the network, made present the members who could not attend.

Attending several speed talks from knowledge networks outside TKN, all the keynote addresses and some theme-based reflections on transformations in practice gave me new insights and hope into how different actors around the world were grappling with similar issues of social justice and ecological sustainability. It also raised many questions, one of them being, “How do we ‘unadjust’ ourselves to the status quo that even those in the progressive movements have fallen victims to too?” I was inspired by the interaction between the more seasoned researchers (such as Tony Hodgson left in figure 2 below) and the young (such as Kennedy Mbeva on the right), which is good for on-going cultural accumulation and developing of transformative knowledge. A lot of the credit must go to the hosts, Dundee University for being so creative in designing to Conference: the relevant music in the mornings, the art work to capture the proceedings and the visit to a castle that is being transformed! 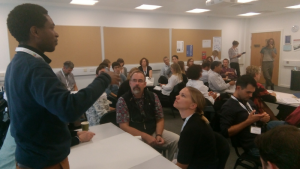 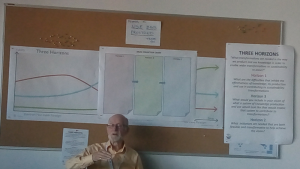 Transformations2017 as a place for seasoned researchers young and old.

It is not surprising that the creativity was also reflected in part of Michael Patton’s evaluation of the conference, put in a song that we sang and includes the following stanzas: 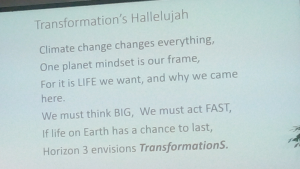 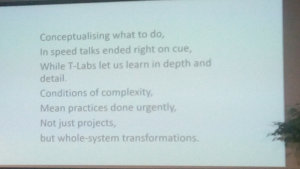 Part of the song composed out of the Transformations2017 Conference

He also noted, “There is a lot of actionable knowledge to address transformations to sustainability challenges discussed during the Conference. The problem is that we do not use it.”

The last two days of my visit in Dundee (Saturday and Sunday) focused on deepening networking between TKN partners by reflecting on our work (Acknowl-EJ, Pathways and T-learning) during a post-Transformations2017 Conference organised by Pathways. I learnt the work and progress of the different Pathway hubs; and the research approaches that they and Acknowl-EJ use. I presented on the expansive learning process and the change laboratory method and shared our (T-learning) emerging theory of practice.  This made me appreciate the different entry points and methodological framings that three TKNs are using towards the same end. More importantly perhaps, we also discussed how to collaborate across TKNs focusing on themes that we identified from the Transformations2017 Conference. This resulted in a proposal to jointly (across TKNs) write papers on topics that include: 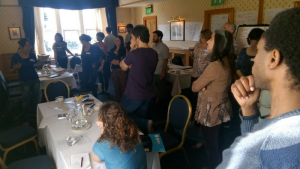 Chulin Jiang from Pathways’ China hub presenting during the workshop

Dinesh Abrol of Pathways, Iokiñe Rodriguez of Acknowl-EJ and I agreed to coordinate a process of writing a monograph on movement building, the emergence of contradictions and how they have been and are being dealt with in transformations to sustainability in TKN work. This means that we will serve as conveners in a writing process that will involve many researchers from all the three TKNs. The monograph will seek out explanations to the growth, and sometimes, subsequent contraction of social movements. We foresee the process, which commences immediately, taking place over a full year.

It will be very interesting to see how the Transformations networks would have developed, and the knowledge resources they would have generated when the next Conference takes place in Santiago, Chile, in 2019.