Translating concepts or words into other languages can transform the concepts entirely, or in some rare cases open up another door into ways to describe the nuanced and complex phenomena we work with in the hot-messes of climate change. And by hot-messes I refer to those neo-liberal consequential forces that influence a myriad of social and environmental justice struggles. Recently I visited Santa Catarina in Mexico, for the 2nd World Encounter on Sustainable Actions: Transforming Complex  Futures – a meeting of hearts and minds to explore what role the Sustainable Development Goals (SDGs) can have in Education for Sustainable Development (ESD). I came on the invitation of Ericka Toledo, a passionate dynamic Mexican environmental justice ‘bruja’. Before the conference began we spent some quality time together planning a workshop we would hold after the event, with the aim to explore disruptive pedagogies and what Arjen Wals calls optimal disruption in the context of transgressive and transformative learning (t-learning).

In these conversations Ericka reflected on her first encounter of the term “transgression” in this context. She said that when directly translated into Spanish, transgression usually refers to an act of aggression. As in the traditional English meaning it is seen as an act that goes against a law, rule, or code of conduct; an offence, which in Mexico is usually associated with aggression. Considering this, and knowing that transgression in this context is an emancipatory act and deeply linked to compassion, Ericka has been translating the term into trascender agresión or transcending aggression. Moving beyond aggression as the only means to challenge or dismantle a normative boundary. In this small disruptive act of reframing the term, Ericka created for us both, and the workshop participants a generative explosion of possibilities.  Emergent ways that we could explore transcending aggression in transformations, this became more and more valuable when we began to think about challenging the static and oppressive boundaries of neo-liberal capitalism as well as the suffocating impact of the colonialism.

Ericka has been working on a collaborative global project that is investigating ways in which Education for Sustainable Development (ESD) can meaningfully work with the sustainable development goals, mainly through the ESD expert net.  If you haven’t come across them yet, the Sustainable Development Goals (SDGs), also officially known as Transforming our world: the 2030 Agenda for Sustainable Development is a set of 17 “Global Goals” with 169 targets between them. Spearheaded by the United Nations through a deliberative process involving its 193 Member States, the SDGs build on the Principles agreed upon under “The Future We Want” resolution or (Resolution A/RES/66/288).

Two major insights captured my attention at this event, the first was Ericka’s careful curation of the talks and discussions creating rich and transgressive discussions on collaborative leadership of woman in transformations to sustainability. It was so refreshing to hear Ericka’s mother (a feminist author who writes about healing, spiritually and society) invite the spiritual dimension of transformation and the inner terrain of our ontologies into the exchange, she emphasized just how important it is to transcend the aggressive nature of disembodied positivist habits of cold-logic-dominated enquiry. The second was the thoughtful input of Saransh Sugandh from India (he and I shared a joint key note where we were asked to speak about “Citizenship, leadership and sense-making in a ‘post- truth’ world: Transferable transgressions from Gandhi’s India to Mandela’s South Africa”. In a simple exercise during his part of the talk, he asked us all to take a deep breath, and then gasp for a little more air, and then a little more still, until we felt so full we couldn’t possibly take in another sip. Then after a short pause he asked us to release the air, and breathe normally; “We have to make room within ourselves to let new possibilities in, to be sustainable is to breathe, letting go, and taking in” bringing us back to our breath was a perfect embodied of how swollen and bloated we have become with information ignorance, logical lunacy and disembodied dumbness. These two moments felt like we were transgressing aggression, and finding together were feeling out new spaces for emergence, or what Alan Kaplan calls “active absence” the empty space we need to make for new things to be born.

While the SDGs aim to respond proactively to many challenges we currently face, it has some major inherent problems and has a broad suite of critical flaws. The most obvious contradiction it embodies is that it seeks high levels of global GDP growth, they will inevitably undermine its’ own ecological objectives. It has also been noted that, in relation to the headline goal of eliminating extreme poverty, “a growing number of scholars are pointing out that $1.25 a day is actually not adequate for human subsistence”, and the poverty line should be revised to as high as $5. The goals also ignore local contexts and promote “cookie-cutter development policies” that make little room available for indigenous knowledge and practices to emerge, let alone lead sustainable transformations. The SDGs have also been criticized due to the inherent shortcomings in the very concept of sustainable development and the inability of the latter to either stabilize rising carbon dioxide concentration or ensure environmental harmony, multispecies flourishing, or even human flourishing for that matter.

While there are many things we must be critical of when considering the SDGs, they are the first outcome from a UN conference that have been received with a broad (somewhat cautious) support from most NGOs, if we cast our minds back to the MDGs in contrast, we might remember the stentch those goals made in the noses of any self respecting sustainable development practitioner. As the catchphrase now goes: “The MDGs dealt with the problems, the SDGs begin to deal with the causes of the problems”.

A week later I found myself at the third Transformations (2017) conference in Dundee, Scotland (more about that in another blog post coming). Shaking the jetlag out of my weary brain, I found myself drawing deeper still into the SDGs at a post conference meeting on a new “transformations forum” which is focusing on the SDGs as a site for creative, accelerated and innovative sustainable transformations, it seems that there is a general consensus that we can work within the boundaries of the SDGs and when in doubt transgress these boundaries as we need to in our individual, regional contexts.

While they are not perfect, these goals are the first step towards a global agreement and hopefully commitment towards accelerated sustainable transformations. While we might not agree with every goal or their means of implementation, they are something we can work with and choose to make our own. The goals are like public squares in cities, which are pre-determined and quite literally “square”. Yet within their limited boundaries, very creative, emergent social flourishing can emerge: farmers markets, justice protests, vigils, queer celebrations and transformative public art. The SDGs are for me a formidable public square (or considering the limits of the 17 goals may be more a Heptadecagon shaped public square) equally hemmed in yet has the potential for us all meet and begin working, protest, celebrate and connect together; transcending our aggression, and finding ways to express our own unique approaches to sustainability. 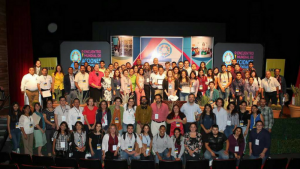 Working with the SDGs in this way, is for me a beautiful example of what it means to “Transcend Aggression” and be transgressive in this precious times of hot-messes. We don’t have the time to be critical without some sort of alternative, we need to make things work as best as we can, and not try find the “best practice” or the perfect fit, because these don’t exist in the form we have previously defined them. What we do have is a general consensus and agreement, and a new place to work with conviction, empathy, compassion and urgency.