There are three layers of learning interactions that have happened among T-learning participants in Zimbabwe since the beginning of the T-learning research project in Zimbabwe in 2016.  We had the first learning in August 2016 and they involved visits to the eight district organic farmer associations in Mashonaland East Province. The interactions were primarily intended to surface and contextualise matters of concern. However, because the district associations were already functional and familiar with the concept of continuous learning, they took advantage of the meetings to jointly tackle the concerns that did not need external input. The unit of analysis for this level of learning was the district organic farmer association. This formed the first layer of learning interactions.

This was following by learning interactions during Change Laboratory (CL) sessions that we held in Harare, which were based on reframing matters of concern and co-developing solutions to them in October 2016. The CL sessions, held on 24-25 and 26-27 October 2016, built on the contextual profiling and situational analysis work that was conducted in August 2016. About 40 organic farmers and eight content specialists and one process ‘specialist’ attended the CL, which was organised into two identical series of sessions. The first series of sessions was attended by organic farmers from four northern districts (Mutoko, Murehwa, Uzumba-Maramba-Pfungwe and Goromonzi); and the second series was attended farmers from four southern districts (Chikomba, Hwedza, Seke and Marondera) of Mashonaland East Province. The design allowed for more farmer representatives (per district) to participate in the inter-district solution-development process; and was meant to make it easier for them to report back in their respective district associations. 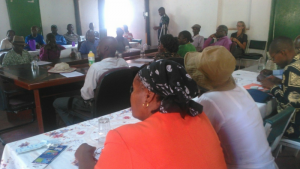 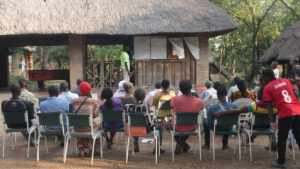 Between November 2016 and August 2017 the district farmer associations made efforts to implement the model solutions that they had co-developed in CL sessions but they were encountering some practical challenges. This created the need for another kind of learning interaction that could help the farmers to implement their solutions and culminated in a learning visit to Shashe in Masvingo district of Masvingo Province and Mazvihwa in Zvishavane District of Midlands Province where farmers had encountered similar challenges (water, seed and group leadership) and managed to overcome them. The learning visit, which tapped into farmer-to-farmer learning and experiential learning, was therefore intended to help the organic farmers see how their ‘abstract’ solutions were being worked with in ‘concrete’ situations. It is worth noting that the farmer innovator who served as content specialists during the October 2016 CL lives and practices his agroecological agriculture in Mazvihwa. The activist who served as content specialists works for an organisation who leadership hails from Shashe.

The learning interactions that were conducted in each district focused on a collaborative analysis of the context and stakeholders as well as of the problems that each district association was facing. The next layer of learning interaction focused on solving some of the group development and marketing issues that the members were facing. The solutions drew on the distributed knowledge and experience of the farmers, agricultural extension workers and process facilitator attending the meetings. Learning interactions during the CL sessions focused on reframing the matters of concern that were identified by district associations, using the networked district organic farmer associations as the basic unit of analysis. The solution development process drew on the knowledge and experience of the organic farmers and context specialists on water, seed, association development and leadership and relationships with stakeholders, and collaborative production and marketing. During the learning visit, learning interactions were between the more experienced agroecological farmers who were visited, and the visiting farmers. It benefited from observation, story-telling, living examples and the giving of small grain seed. The visiting farmers reciprocated by making suggestions on what could be improved. 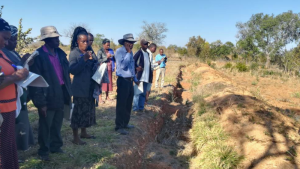 Mashonaland East organic farmers are shown a dead-level water-harvesting contour and some of the open-pollinated legumes and small grain seeds, and locally processed cooking oil 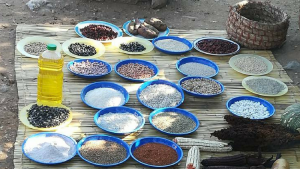 Below is an extract of a conversation aimed at addressing group leadership and group development challenges during the CL sessions of October 2016.

[by the district committees] will build member confidence in them.

LND163: Transparency entails reporting on finances … information of finances should be communicated to members …

LND168: One of the points you made earlier is that the district committee should meet…

LND169: The district association should [also] coordinate market and disseminate market research findings and work [well] together with the [local] associations…

LND183: I would suggest that one of the roles of the committee which is functioning well is to recruit members also groom successors because it is important for self-renewal.

LND197: I think that they [district committees] should continuously monitor production.

The following stories were told by the host farmers during the learning tour of September 2017 in connection with not giving up when one encounters problems and on dealing with free-riders in groups:

Below is a figure showing seedling and seed giving, which also illustrated the generosity of host farmers. 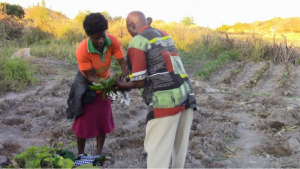 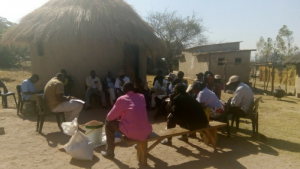 There were many moments of learning that seemed to be particularly significant. These occurred during the CL sessions as illustrated in the speech turns presented in the preceding sections. The other learning moments occurred during the learning visit. The learning visit increased the organic farmers’ preparedness to act in a manner that ‘classroom’-based conversations would not have achieved. For, they were able to see the practical work and some of the real results arising from water harvesting contours and received small grain seed that is adapted to hot and dry conditions. The experience had an agentive influence. The learning process also appeared to ‘ascend’ from the abstract concepts developed, shared and refined during the change laboratory to how the ideas were being practised and lived: water harvesting, seed security and solidarity and performance of the farmers associations. This may constitute an important part of the process of the potentially transformative processes associated with agricultural production and marketing as well as group development and performance. Below are some statements made by visiting farmers that suggest the significance of the learning visit:

“As people who have had the privilege to look and learn; we have the responsibility to demonstrate the changes we want.”

“Now I know why I do not have money: It is because I do not take advantage of what I have, the resources that are available in my area.”

T-learning facilitators created opportunities for learning interactions to take place. We also mediated the learning processes and interactions during the initial meetings, change laboratory and learning tour. But this role was shared with the organic farmers, content specialists and host farmers respectively. We provided some of the tools that mediated learning, including stakeholder and contextual analysis frameworks, the expansive learning cycle and problem tree analysis. We also linked the organic farmers to content specialists and farming communities who had the potential to assist the farmers to develop solutions to their challenges. We also mediated processes of making sense of the discussions through the development of action plans during each of the three layers of learning interactions.

There are several issues that are emerging from the learning interactions that have a bearing on the sustainability of T-learning in the Zimbabwe case study. Two of them are about how to: