Thoughts from the Transformations 2017, Dundee Scotland

“One-point-five-to-stay-alive’ or more like “one-point-five-we–might-survive.” This lyrical chant comes from Kumi Naidoo, the current organiser in the Africa Rising movement (former Director of Greenpeace). It is a sound bite from his key note address at the Transformations 2017 conference in Dundee, Scotland this past month (September), which I was fortunate to attend thanks to the International Social Science Council’s support. The ‘one point five’ refers to the utmost global temperature limit (1.5 degrees Celsius) that we can afford to rise to before we experience run-away climate change: you know the scene – pick your Hollywood computer generated tidal wave, enveloping a national monument, lets say the statue of liberty and then moving on to ravaging buildings into rubble. Those scenes that somehow feed our collective sadistic voyeur – our obsession with what Timothy Morton describes as something “like a video of your own funeral.” The use of “apocalypsisms” were scattered all across Kumi’s talk. He highlighted the many wicked and doomy gloomy problems that now encircle the globe, the  “Convergence of a crises” as he put it. After we watched our own climatic funeral in his series of slides, his thoughts then quickly jumped to a call for us to see transformation as “creative maladjustment” quoting Martin Luther King’s famous speech that encourages maladjustment to coloniality. In some aspects I appreciated Kumi’s perspective, as he was critical of our own comfort, and lack of discomfort in the neo-liberal capitalist system we found ourselves. He called out the “Affluenza” in the room: using an online algorithm he revealed that the majority of the people the auditorium were living within the comfy 4% most richest demographic on the planet – a silent pensive inner reflection washed over the crowd.

Despite his best efforts, I felt uneasy after this keynote, it didn’t inspire me, it didn’t motivate me, in many ways it made me feel shit about myself, and it made me think there was little hope left. How helpful is this ‘truthful inconvenience’ – Al Gore-like approach? the chicken-little “pornography of despair”. It was a stark contrast to the powerful heartfelt call Susi Moser made in her keynote, a simple yet resounding call for life. In her intimate and personal account, “not so much a presentation but a meditation… more of a prayer than a speech” she walked us through a visit she recently had at the Dynamic Earth Science Centre in Edinburgh with her partner Carol. Coming to the word life and all that it embodies was for her a…

“… realisation that we have to do something much more profound than repair, protect, restore, if we want to ensure a liveable, safe, resilient, or any of these more alluring ways of having a future on this planet… so now let me use the short hand I am using to capture the goal of transformation that we are facing right now… Life in it’s most basic and richest sense of the word”

Throughout the rest of the conference it felt that this preface of “if it is life that we want…” wedged opening the space in front of any of the questions I was considering. So too the 1.5 ceiling was present in the back of of all of our minds, looming, circling over every session like vultures, and sometimes like those sparrows that fly around concussed Disney characters. The sense of urgency was palpable, considering that we only have around three years to make accelerated transformations across society in a significant way, if we are to avoid rising beyond 1.5 degrees and the inevitable catastrophes that lie beyond that ceiling.

Three years it not a lot of time, and the need to find ways to accelerate the transformations we need are crucial. There were murmurs and whispers of acceleration here and there, which was encouraging to hear, seen as we were scheduled to host a practice session entitled “Accelerating Social Change for the 1.5°C Challenge”. The session was convened by Sarah Moore from the International Social Science Council (ISSC), and she invited Susi Moser and myself to help facilitate the session.

Future Earth and the ISSC’s Transformations to Sustainability programme, along many others have been supporting several significant research initiatives that focus precisely on helping to accelerate transformations to sustainability, and so capturing these examples of acceleration was our aim. Following the urgency, we all felt it comforting to have a space that allowed us to focus on pulling together what we know about scaling up, diffusing and accelerating the adoption of practices that can help us stay below a 1.5°C temperature increase, and to do so in a socially just way. That was the goal, as well as to create a safe space for participants to share, discuss and prioritise interventions or strategies that can help propagate or accelerate the adoption of practices that contribute significantly to a reduction in greenhouse gas emissions.

When thinking of acceleration in this context, the first ‘acceleration’ image that came to me was that of my mom teaching me to ride a bicycle as a kid. How I needed a little push – an acceleration in order to stay up, and how I only found my balance once I was moving faster than I anticipated. Reflecting on this, and thinking how we might advertise the workshop, I began sketching and working with the image of a bicycle and thinking about Susi’s seven strategies. It made sense to see the seven strategies as the spokes of a bicycle wheel. So wherever you started, the wheel turns and in turn you rely on a different spoke, in relation to the others, to hold you up and keep you moving, over time the image developed further, inspired by Jung’s ‘monster’ in his “Red Book”, a complex mutated creature with multiple legs. I thought of this mercurial figure cycling over the rough terrain of the many armed crocodile that embodied the wicked problems, the nexus issues or the  “convergence of crises” that Kumi Naidoo spoke of; and it is these very challenges that could energise the compassionate and kind push we need to move forward. 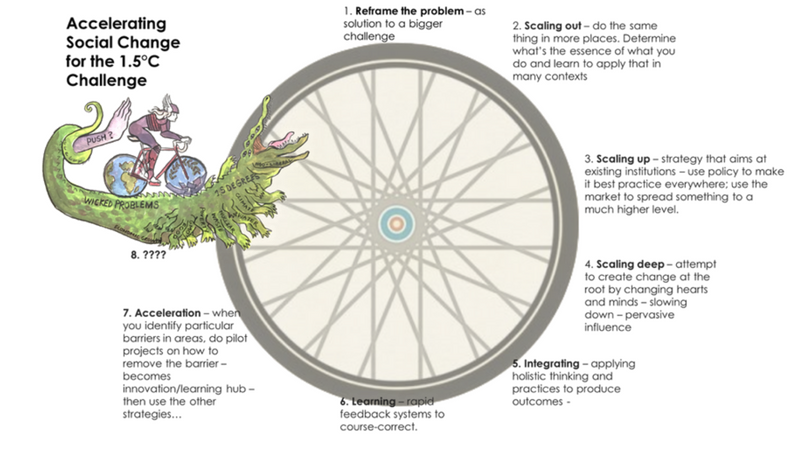 This conference was for me encouraging mostly because the ambient energy of the gathering was shifting – it was a sense that at the heart of all transformation was the need to look inward, to look at the outer through considering the inner. You know those so called “imaginal cells”, the ones that rearrange in the body of a caterpillar as it transforms into an iridescent winged monarch. It felt as if there was a communal rearrangement of ‘imaginal cells’ in those three days, where personal inner reflection and transformation was happening, and being valued as a key contributor or collaborator with logic and science. A fearless, unashamed yet critical gaze into intuitive, subjective objectivity, a feeling, sensing, sensuousness to these massive problems was and is emerging beyond this conference. It felt as if scientists and artists alike could find common ground through this basic yet profound shift to acknowledge and appreciate the power of personal, inner reflexivity and transformation, and that this lay at the heart of all transformation towards regenerative systems.

What happens in the next three years might determine everything, and I really feel after these intense three days in Dundee that what will keep us under the “one-point five” flood-line will be the important distinction between staying alive and ensuring all thrive. It will be a process of detoxing from our addiction to the apocalypse, and refocusing our attention on the living, thriving elements of ourselves and our ecosystems, and it will be the personal and political will needed to accelerate this change, with the same gusto and solidarity we see in accelerated social transformations during times of war, without any of the violence.