The Zimbabwe case study is located in eight districts of Mashonaland East Province: Chikomba, Goromonzi, Hwedza, Marondera, Murehwa, Mutoko, Seke and Uzumba-Maramba-Pfugwe (UMP). The communal areas in which the farmers live and farm have low-to-medium agroecological potential due to the amount and distribution of seasonal rainfall; and the predominantly nutrient-deficient and over-used sandy loamy soils. These ecological factors contribute to the low production levels, which exposes the farming households to social, ecological and economic shocks. It has been worsened by low levels of farmer collective planning and action to better manage the natural resources, including land, sustainably and lack of knowledge and skills to produce adequate nutritious food and income. These challenges inspired three Non-Governmental Organisations (NGOs): Fambidzanai Permaculture Centre (FPC), Zimbabwe Organic Producers and Promoters Association (ZOPPA) and GardenAfrica to develop a project called Livelihood Security in a Changing Environment: Organic Conservation Agriculture. They jointly implemented it with the Agricultural Technical Training and Extension Services Department (AGRITEX). It was implemented from 2011 to 2014 to develop farmer capacities in:

As a programme officer of FPC, Kuda co-facilitated the formation and development of the local and district farmer associations until 2014 when the project ended. Mutizwa, one the other hand, served as a participatory action researcher for GardenAfrica: using Developmental Work Research to facilitate expansive learning processes in each of the eight district associations in 2011 and 2012. We used our combined linkages and histories of working with the organic farmer associations to reconnect with them through their leadership; and through AGRITEX officers whom we had worked with. Our new relationship was going to be an extension of ‘participatory action research’ focusing not at local organic farmer association level, but at district and inter-district levels. We contacted them through phone calls and explained what the programme would involve and all of them expressed their willingness and excitement to participate. 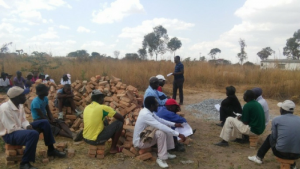 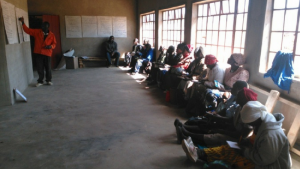 Discussing matters of concern in Hwedza and Goromonzi district

Matters of concern were identified through holding eight district workshops from 8 to 19 August 2016. They were attended by 99 organic farmer representatives, nine agricultural extension workers and one government youth officer. Each district workshop sought to identify production, marketing and contextual challenges, and separated straightforward issues from difficult issues to set aside for collective and supported analysis and resolution. The following matters of concern were identified:

There are several ways in which the matters of concern could be taken forward for further analysis and subsequent solution development. The nexus issue metaphor appeared interesting at one level because it links the main issues together and underlines their interconnectedness. However, it has a particularly interesting limitation associated with making stratified matters appear at the same level: For example, climate change and variability, water, and food insecurity, which may have a causal and stratified relationship, are connected as if they occupy the same stratum. The problem tree analysis approach that many farming communities and development practitioners are familiar with separates the root causes from the problems and their effects and is consistent with basic critical realism.

The organic farmer associations have had a history of collective identification and analysis of difficult issues on which the T-learning project can build. For example, one solution that was developed by one local organic farmer association and adopted by the rest was to identify and seek permission to use fallow land. This helped them avoid having to go through a three-year conversion period during which their produce could not be certified organic. Associations operating in the drier areas had already begun shifting from horticultural production to small grain and small livestock production, which are more ecologically appropriate. Two district associations had expanded membership (of local associations) even after the project had ended in 2014 while most were failing to maintain the old membership.

All the three sets of matters of concern were taken forward and served as mirror data in the change laboratory that was held in October 2016.