The Mahatma Gandhi Institute of Education for Peace (MGIEP) and Sustainable Development[1], UNESCO’s category-1 research institute, has been working on a youth-led, technology-enabled, crowdsourced Global Monitoring Framework for any community-centered issue and learning (which can also be in line with any of the seventeen Sustainable Development Goals). The project, which aligns with the ‘Rethinking Youth’ programme at MGIEP, is in partnership with 4th Wheel Social Impact, a youth-led organization working towards strategizing, monitoring and evaluating social programs across India. This is also a collaborative effort with the T-Learning network, a collective of initiatives world-wide exploring the modes of learning for sustainability.

The project implementation is structured in three phases: Phase 1 involved understanding the existing context; Phase 2 consisted of consultations and workshops for a preliminary data collection to understand the population and community issues; and Phase 3 involved using the insights gained to build a technological platform (or app) for sustained monitoring and learning. Phases 1 and 2 are complete and phase 3 is currently underway.

A total of 15 workshops and consultations were held in the two cities of Bhuj and Gandhidham and were attended by around 1,800 youth from 3 schools and 5 colleges along with senior education stakeholders. The 7 activities co-curated and implemented at these workshops spanned a contextual understanding of aspects of social development, participatory methods asking youth to identify issues in the education system (with a hypothetical budget of INR 10,000 to invest on the three most important issues), and stakeholders and power dynamics. They activities were aimed at gauging issues that young people and other stakeholders care about, as well as deploying youth-led technological mechanisms to collectively act and monitor social change and learning around such Issues.

The remaining part of this article will be devoted to the nuances and other details of the consultations and workshops. 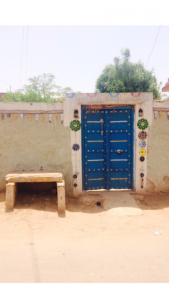 Located in the heart of the Kutch district of Gujarat in North-Western India, the desert city of Bhuj and its nearby villages are known for its rich culture demonstrated through the craftsmanship and local Gujarati cuisine. Many communities, specifically the women, rely on craftwork like bandhani (a local tie-dye technique), mirror and embroidery work and batik printing for sustenance. While the official language of Kutch is Gujarati, the indigenous population prefer to interact in the local Kutchchi dialect of Gujarati. In the earthquake of 2001 that left thousands dead and hundreds of buildings demolished, the city of Bhuj was shaken to its roots. Despite the disastrous calamity however, through communal participation, a complete city rehabilitation took place where its people managed to overcome and move ahead towards progress together. Communal harmony and participation has been one of the defining traits of the entire Kutch district – not just Bhuj but even the neighbouring city of Gandhidham which was established in the 1950s after the partition of India (formation of Pakistan) for the Sindh refugees and named after the ‘father of the nation’, Mahatma Gandhi.

With this spirit of an active and united community, the project to implement the issue-identification pilot project to track and monitor community-centred issues within and beyond the framework of Sustainable Development Goals (SDGs), and most importantly, community learning around such issues using technology for social change was Initiated with the youth of Kutch. 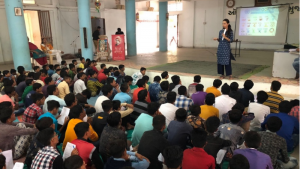 Describing project goals to the youth of Gujarat

The underlying premise of the project is to provide a technological tool to monitor community action and learning around community-centred issues. Though the current focus is education (Goal 4, 4.7 in UN lexicon), the tool should be able to aide community monitoring on any issue. In order to ensure that all community members gain the necessary knowledge and education to live in a sustainable manner, it is pertinent to create communal engagement and participation by all citizens. Therefore, the project primarily focuses on testing and establishing an active role of the youth for social change. The overarching goal would be to provide the community members with a new form of social learning – a transformational and transgressive learning — for overall community growth and development. The emphasis of transformational learning is on a comprehensive and all-encompassing education where knowledge on gender equality, human rights, global citizenship, and sustainability is given focus through “co-learning, cognitive justice, and the formation and development of individual and systemic agency” (Lotz-Sisitka, Wals, Kronlid & McGarry, 2015).

This message is further reiterated through the crowd-sourcing data collection methodology wherein young agents of change take an active role (rather than relying on the passivity that comes as part of a survey or interview method) in the study. Since our sample is the youth population comprising of students in higher secondary school and college, the pilot study focuses primarily on education and issues that directly affect the youth.

In July, the team visited schools and colleges and undertook workshop sessions and interactions with the youth and leadership stakeholders of Bhuj and Gandhidham talukas. During the workshops, descriptive sessions were given about the project scope, goals and the application setup and procedure. Further, the study team also conducted activities with the students using participatory tools to gauge their level of understanding and engagement in social issues in their respective regions. In the interactions that ensued, students, as well as community stakeholders, voiced their diverse opinions of their communities.: “I believe there is a water problem in Kutch. Every week there is one day when there is no water available”, answered a student of R. R. Lalan College when asked to reflect on the main issue the community faced. “Girls face a lot of problems here. They are scared of boys and they are afraid to leave their house. Sometimes even parents do not let them leave the house because of boys”, added another. When asked who should solve these issues, the replies were a seemingly undoubted chorus of “We are responsible. We will have to fix these issues. As in, whoever is responsible [for creating] these problems will only have to [change]”.

Underlying these issues was the power dynamics of the community. Building on the reflections of his students, the Principal of R.R Lalan College, Mr Paresh Raval said, ”Our society is underdeveloped and stagnant, and if not directly, there is indirect discrimination based on land ownership and communities under the veil. There is poverty and inequality. Further, whatever growth and development has occurred, there is still a lot of inequality [still prevalent]. Some people have extra power, whether it is financial power or political power. There is also [an issue] of gender bias and caste-related issues…and because of all of this…while it may appear that everything is balanced, some people have a lot of power and some people are dependent on these powerful people [and structures] and they have adapted to it”.

Mr. Yusuf Khan, Principal of Muslim Education and Welfare Trust, thought that the long history of marginalization and Illiteracy is also acting as a barrier for the younger students. “Our school is a Muslim minority school, so 90% of the children here are Muslim, naturally. The problems that they face is that their parents are still not [educationally inclined]. They do not give proper attention to their child’s education; they depend completely on the school and the teachers. Our main issue is that since parents are not literate, the students [do not show] the results or improvement others could have”, he said. 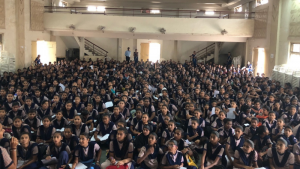 While the team began tentatively, predicting only a moderate level of understanding and participation, the response was overwhelming! Although the younger participants did face some difficulty understanding certain terminologies and concepts, most students expressed themselves freely in their local dialect, and were ready to interact and participate in the project. Further, due to active cooperation and facilitation of the leadership stakeholders like principals of schools and colleges, and the District Education Officer (DEO), the sessions went smoothly. While technical and logistical issues due to lack of proper infrastructure did curb the ambitious number of participants the team wanted to reach each day, the overall experience was nothing less than remarkable. Within a period of four days, the team managed to reach approximately 1000 youth students with the support of six education institutes spread out in Bhuj with a diverse population of students. What made the field visit to Bhuj even more worthwhile was the benevolent and accommodating nature of the five leadership stakeholders – primarily principals and heads of departments in colleges – who aided the study team and provided us with insights and suggestions for the implementation of upcoming stages of the project.

Over a series of interactions and the pilot stage of data collection, the youth, as well as senior community stakeholders, reflected on the past, the present, as well as the future of their beloved communities. The short video recordings (currently being transcribed) had the impression of a community that is rich, free and reflective. One could see the agency and the energy exhibited by the young change agents as they reflected – in their own dialect – on issues pertaining to their community, especially relating to education and learning in a fast-changing world. Cutting through all their concerns was an acute awareness of their community, a concern for its issues and most importantly, an understanding that the ultimate responsibility lies in their hands – a promising beginning towards enabling and effecting change.

With the culmination of the pilot stage of the project, the team is currently in the process of designing and developing a mobile application that can capture the issues, actions and indicators of change, while keeping a user-friendly and interactive platform for our young change agents to operate, learn from and engage with for group participation. With the level of response and participation, it is expected that the next phase of the study – application usage – will be equally fruitful.

Contributors to this article

[1] UNESCO Institutes and Centres: Category I Institutes: Although operating with significant autonomy, these Institutes are an integral part of the UNESCO Education Sector programme, supporting research and institutional capacity in Member States.