The Colombian T-Learning project involves collaborative work with grassroots communities to co-design, facilitate and evaluate ‘transgressive’ learning spaces which address local sustainability challenges. It is based on articulating T-Learning processes across self-organising regional networks, with each network providing a representative who is part of the national T-Learning team. Building on our team-building and organisational T-Lab held in the Indigenous community of Atánquez (20-24 January 2017), the Colombian team has carried out two further T-Labs engaging Indigenous knowledge and practices towards addressing the issue of water conservation, which we will describe below.

The first T-Lab was held in the ecovillage of Aldeafeliz, in the department of Cundinamarca, in which Aldeafeliz have initiated intercultural dialogos de sabers (knowledge dialogues) with neighbours, local schools, Indigenous elders, and the local municipality surrounding the topic of water conservation in the territory. Innovative methodologies involve ancestral practices of Pagamentos (offerings to Mother Earth) to connect participants to the soil, an olla comun (communal pot) in which participants brought food and cooked together, as well as collective work parties called Mingas where participants experience working on a sustainability project together. In this case, the project involved reconstructing the Casa de Pensamiento (the house of thought) which is the traditional ceremonial house of the community where workshops and discussions around the fire take place. The Casa de Pensamiento is evolving into an important symbol for the T-Learning project, acting as an important ‘transgressive’ space for ideas, experiences and worlds to encounter each other in a powerful learning environment (see Macintyre et al, 2017 for an engaging read into the construction of a Casa de Pensamiento in a municipal school).  Two of the residents in Aldeafeliz are acting as co-investigators in the T-Learning case, conducting interviews with fellow residents and participants surrounding their conceptions of transformative and transgressive learning.

As noted by T-Learning representative of Aldeafeliz, Tatiana Monroy, the T-lab was an overall success. The communication of the workshop was well disseminated in the municipality, with representatives from the municipality participating in some of the activities, and a number of close neighbours brought friends demonstrating a growing interest in the topic and the work of the community Aldeafeliz. The olla comun (pot-luck) was a particular success, with Tatiana Monroy noting how “food is fundamental to the fabric of the community. It generates a closeness between us because we all eat – from the peasant to the mayor.” The challenges to the T-lab were centered around difficulties of logistics and participation in the more ‘heart’ spaces during the T-lab. The initial planned activity was a mambeo (ceremonial conversation around the fire) in which Indigenous elders were invited to share their wisdom and words, about the relations of the territory. The elders did not show up, however, and so this activity was cancelled. The other aspect was the method of the pagamento (offering) involving a ceremony directed to Mother Earth. Despite managing to convene municipal representatives to the T-Lab workshop, the representatives did not participate in the pagamento, which Tatiana Monroy noted was probably due to the activity being too strange for the representatives. This raises the challenge of designing multi-stakeholder spaces with ‘disruptive’ elements, which are different enough for participants to leave their comfort zone, but not too foreign to create a barrier to participation and learning (optimal dissonance).

The olla comun (pot-luck). Each participant brings food which is prepared and consumed together around the fire. Aldeafeliz, Municipio San Francisco, Cundinamara, Colombia.

The second T-Lab was held in the southern department of Nariño, facilitated by the organisation Nuh Jay, in collaboration with other organisations. The T-Lab is called MinkaYaku, and is a social laboratory focused on the integral management of water in the region Panamazónica, where the Pacific, the Andes and the Amazon region converge. The goal of the five planned T-labs is to contribute to transforming beliefs and practices around the culture of water useage – away from current wasteful practices towards a culture of care and conservation. This is being realised through empowering youth (between the ages of 18 and 35) to think systemically through collaborative actions, innovative design of agroecological systems, and capacitation in non-violent communication across cultures and institutions. Through a dialogo de saberes (knowledge dialogue) methodology, MinkaYaku invites the four sectors of public, private, academic and society civil society to join together to become ‘waterpreneurs’ and through ancestral practices, dances of universal peace, and art and social innovation, to influence public policy in towards more responsible use of water.

The challenges faced so far has to do with the number of participants, funding, and time. Although the first T-labs demonstrated a diversity of participants, the numbers were lower than hoped for. Working on the margins of mainstream institutional projects also means difficulties in obtaining funding for workshops. Many institutions pledged economic and presential support, had their logos added to the workshop fliers, but representatives did not show up and neither did the money. Lastly, as part of a bigger event, the workshops only had a duration of two hours. This proved too little time to go into depth and create a reflexive process amongst participants. 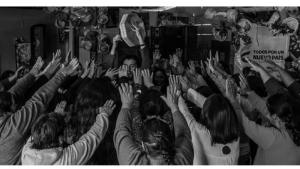 Dances of universal peace, based on the Sufi tradition. Pasto, Nariño, Colombia.

Aside from the challenges faced by each regional T-Lab, there are overall challenges facing the Colombian T-Learning project. With the overall focus being on articulating T-Learning processes across self-organising networks (rather than single communities), an emerging challenge is deciding on a common framework of exactly what a T-Lab is, how to run a T-Lab, and how to evaluate transformation and transgressive learning. Each regional node has its own local challenges, methodologies, and ways of carrying out T-Lab workshops, and the recognised need is to streamline regional activities to provide a means of developing a shared framework from which to work on and evaluate. It was decided during the Atánquez T-Lab in January 2017 that these questions would be addressed after the first few T-Labs were held. Accordingly, the Colombian T-Learning team will meet personally in the ecovillage Aldeafeliz between June 8-12 to discuss a common methodology and indicators for conducting and evaluating T-Labs.

We look forward to sharing our experiences with you all!