Context and history of the Colombian case study

The Colombian case study explores learning-based change within and between initiatives which are part of the sustainability network CASA Colombia (Council of Sustainable Settlements of the Americas (CASA). CASA was formed in 2012, and evolved out from the Ecovillage network of Colombia (RENACE), expanding its focus beyond the world of ecovillages towards articulating its social movement with Indigenous communities, permaculture initiatives, ecological settlements and urban based organisations around the central issues of territory, food, ancestrality, water and social justice. CASA organises various events throughout the year, with the flagship event being El Llamado de la Montaña (The Call of the Mountain) – an annual intergenerational gathering, lasting seven days, in which up to 400 people come together to share experiences on communal life, sustainable living, and visions for the future (see this link for an article about the learning potential of this event). 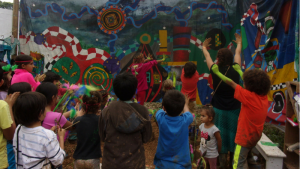 Theatre during the ‘Council of children,’ 2016, Call of the Mountain, Putumayo, Colombia.

The lead researcher, Thomas Macintyre, and coordinator, Martha Chaves, have been active members of the CASA network since its founding in 2012, participating and organising national events such as El Llamado de la Montaña, conducting research in member communities, and holding organisational roles. Both researchers have gradually become part of the very fabric of the organisation, accepted and trusted by other members of the network.

A strong focus of the network is on personal growth, spirituality, and transformation through action-based projects. Previous research into the CASA network into good life narratives of buen vivir have blended into the focus on radical learning-based change, which is the focus of the International T-Learning project. During El Llamado de la Montaña of 2016, the Colombian T-Learning project mapped out the different initiatives participating in the event, with a special focus on initiatives with possibilities for transformative learning. Through this process, four initiatives were approached and asked if they would like to participate in more depth in the Colombian case study as co-researchers – investigating their own community processes within the framework of the case study (these initiatives are described on the Colombian page of the T-Learning website). This signified a change of relations from research subjects to active researchers in the project.

Participatory action research and the scoping of matters of concern

This change of relations between ‘researcher’ and ‘subject’ is an important aspect of the Colombian T-Learning project, whereby the methodology used is Participatory Action Research (PAR), a research approach based on participation of communities and researchers on action based projects – in this case, the ‘action’ of PAR being transformation labs (T-Labs) held in each community. Learning is fundamental to this process which involves iterative planning-action-reflection cycles, with a special focus on the shared commitment to fundamentally disrupting conventional hierarchies of knowledge production.

This decolonial approach appreciates that in an accelerating world of uncertainty, complexity and vested political interests, there are no unbiased matters of ‘fact,’ with the ways we understand the world being saturated in values which help determine our views and behaviour. For this reason, an important concept for the T-Learning project is that of ‘matters of concern,’ which appreciates the risks and contested nature of knowledge.

In terms of scoping matters of concern, it was important for this research that communities themselves determined what their concerns and needs are, at the same time as identifying their own resources and what they can offer to others. Many of these initiatives have actively been working on social and environmental issues for many years, and many have a focus on environmental education in informal settings. What the T-Learning project has attempted to do is provide a learning framework around transformation and climate change, whereby each co-researcher can explore their own processes from the lens of a researcher as well as a community member. The job of the lead researcher is then to bring these different but interconnected narratives together in a way that demonstrates forms of learning with transformational potential.

Following initiatives mapping their own matters of concern through group zoom discussions, and filling out a format made by the lead researcher, a team building workshop was held in the Indigenous community of Atánquez (see blog here) where these concerns were shared within the team. These concerns ranged from issues of water conservation, sustainable community building, ancestral education and eco-tourism. What quickly became apparent was how all these concerns were interlinked through a deep commitment to bringing to the surface what the ecovillage Aldeafeliz call ‘silent knowledge’ within a context of peace reconstruction in Colombia. This nexus issue of silent knowledge might go by other names such as Indigenous or traditional knowledge, deep ecology, spirituality or buen vivir (the good life), but is expressed in all the initiatives through the importance of opening up to other ways of learning and expressing ‘what we know and don’t know’ in our relations with Mother Earth. The following are examples for the initiatives: the power of song and dance to connect with other human and non-human entities (Initiative Nuh Jay); the sacred nature of water and its connection to territory (Ecovillage Aldeafeliz); the role of developing one’s own personal myth in formal education (Colectivo Talanquera); building community through non-violent communication techniques among marginalised communities (Bioregion Caribe); and exploring the potential of agroecology as a social movement through its principles of deep connection to sustainability practices (bioregion Quimbaya). 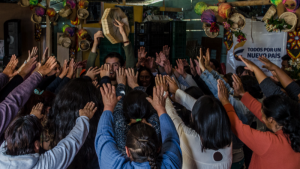 Through a back-casting exercise during the T-Lab in Atánquez, in which co-researchers told the story of how they imagined their initiative in 5 years time, the team gained a glimpse into each others’ visions of the future. It was clear was that beyond dreams of a more beautiful tomorrow, a practical desire for action was overwhelming – to develop new reference points in practice through networking experiences with which to inspire others.

Expansive Learning potentials: learning what is ‘not yet there’

Rather than learning being an ‘acquisition’ of knowledge based on previously held ideas, or ‘participatory’ in that the learner takes an active role in their own learning, this project is interested in expansive learning which uses the metaphor of ‘expansion’ to explore how, in a complex world in constant flux, learners learn something which is ‘not yet there’ (see Engestrom and Sannino 2010). In the Colombian case study, this involves, broadly speaking, how  ‘silent knowledge’ can be shared through workshops and everyday practices, and contribute to personal reflection and collective transformation in terms of acknowledging our deeper connections with each other and to the Earth.

A proposal shared by three of the initiatives are T-Labs based on the Casa de Pensamiento (House of Thought) – a ceremonial house based on Indigenous traditions, where spiritual work is carried out in the community (see this chapter written with Colectivo Talanquera about the methodology of the Casa de Pensamiento). Many CASA initiatives have these ceremonial houses, which blend Indigenous rituals with other social innovation practices. Through community members and participants carrying out mingas (collective work parties), ollas comunes (shared meals), and workshops into non-violent communication and governance systems of sociocracy, there is a culture of sharing and collective learning in informal settings. An important consideration is the observation made by co-researchers that although people are inspired and motivated by practical examples of living more regenerative lifestyles, and the idea of spiritual re-connection with Pacha Mama (Mother Earth), there is a real need for people to experience these stories of transformation. It is fine to read about the need to lower our carbon footprints, and to romanticise Indigenous wisdom, but what does it mean to live with other more ‘silent’ worldviews? To what extent can we, or should we, incorporate them into our lives? What difference can this make to the grand sustainability challenges of our time? 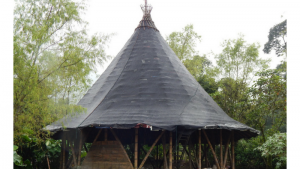