An introduction to transgressive learning in Colombia

We are at a historical turning point in time where as a human race we are burning the ecological bridges which connect us to the life sustaining veins of Mother Earth. With scientific consensus on the ‘facts’ of human-based actions exacerbating climate change, and the daily reminders of hurricanes, floods, drought and soaring temperatures – with much more to come – it is the question of our time as to why we cannot as a society break the status quo of business as usual.

At the heart of these tumultuous times is the role of learning in helping us address these challenges. In this project we understand learning to mean the the transformative process of taking in information that—when internalized and mixed with what we have experienced—changes what we know and builds on what we do. This project is especially interested in an emerging form of learning called transgressive learning, which is a form of transformative learning that seeks to disrupt hegemonic power structures which act as barriers to personal and collective transformation (See this paper for a more detailed definition and examples of transgressive learning in Colombia). Addressing this head on, the Colombian T-Learning study seeks to map, analyse and promote transgressive learning  within and between initiatives which are part of the sustainability network CASA Colombia (Council of Sustainable Settlements of the Americas (CASA) (see previous blog  for details of the case study).

The Colombian T-Learning case study initially began with mapping initiatives participating in the CASA event El Llamado de la Montaña in the community of Anaconda del Sur, Putumayo, 2016. Through semi-structured interviews with participants, directed at the transformative learning potential of the gathering as well as the interviewee’s own initiative, results demonstrated how the intercultural El Llamado de la Montaña can act as a transformative catalyst in terms of challenging value and belief systems, as well as acting as spaces for building alliances. The extent to which these transformations affect structural barriers, however, was unclear, as well as the question as to how this transformation takes place in individual communities. What became clear was that to explore the ‘transgressive’ boundary pushing nature of these transformations in the network, it would be necessary to follow concrete ‘projects’ throughout the year.  To this end, lead researcher Thomas Macintyre and coordinator Martha Chaves approached four initiatives who are part of the CASA network, and who participated in El Llamado de la Montaña of 2016, and asked if they would like to participate in more depth as co-researchers – investigating their own community processes (these initiatives are described on the Colombian page of the T-Learning website). All initiatives were enthusiastic about joining the project.

A few months later the new Colombian T-Learning team met during the general assembly of CASA Colombia, and discussed how to organise the different initiatives in terms of location and organisation of the project. It was decided to work at regional levels, with each initiative representing a different bioregion. We discussed the different characteristics of the communities we were working in, and from a learning point of view, began to work together on the methodology based on co-production of knowledge – working as co-researchers – learning how we could share specific administrative tasks, organise ourselves from a governance system of sociocracy (based on a system of distributed authority, and inclusive decision-making) and an outline for carrying out research we were all interested in.

Working with four initiatives in different parts of Colombia necessitated setting up a virtual workspace through google drive, where reports, articles, and files could be shared. We also carry out virtual zoom meetings every few months to connect, provide updates, address concerns, and plan upcoming events. The first zoom meeting took place on the 13th of December, where the T-Lab workshop in the community of Atánquez was organised. This was an important meeting as it involved organizing the logistics of spending four days in the Indigenous community of Atánquez, and deciding together on the agenda with workshop objectives, and allocating facilitation roles.

From a learning interactions point of view, it is an interesting challenge to communicate and organise projects through virtual mediums. A pre-agenda is sent out to participants who give feedback. During meetings, roles are assigned such as scribe, facilitator, and time-keeper. Emphasis is placed on giving to time connect to other participants through a ‘check in’ where each participant shares how they are feeling, as well as a ‘check out’ where feelings of how the meeting went are shared. Despite the benefits of being able to communicate virtually, there are various drawbacks such as the practicalities of agreeing on a time when everyone can be present, the ubiquitous internet shortages which disrupts meetings, and the at times inefficient process of sociocracy where decisions must be taken through consensus.

While there is no good substitute for face-to-heart communication in vivo, virtual meetings provide a means of sharing experiences, organising tasks, and keeping notes on important decisions. 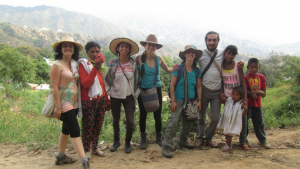 The workshop in the Indigenous community of Atánquez was organised as the project’s first T-Lab, with the purpose being a team-building exercise in which we would connect with the local community, plan our project in detail, as well as explore our own processes of transformation. We stayed in the humble/(ecological!) earth house of Doña Rosa, a local Kankuamo leader promoting sustainability practices in the community (see this video for a crowdfunding campaign we made with Doña Rosa).

During this T-Lab we carried out many learning activities. Employing the art therapy technique of felting, we each felted the five greatest turning points in our lives using different coloured wool into a circle. We then video recorded each other explaining these turning points thus creating life histories of personal transformation. This was an emotional exercise as it brought forth deep moments in our lives which we creatively translated into art, then put into words. 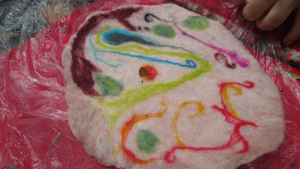 In one of the traditional malokas of the community (a Casa de Pensamiento) we put sociocratic principles into action by planning the T-Learning project through creating ‘cells’ or working groups to address different needs for the project. Tatiana Monroy, co-researcher of the Ecovillage Aldea feliz, is a trained facilitator and guided this process. We also carried out dragon-dreaming, which is a collaborative tool for envisioning futures, in which Tania Laisuna, co-researcher for the initiative Nuh Jay is a trained facilitator and led us through the steps of ‘dancing with the dragon’. We came to the joint decision that we wanted to work towards outscaling transgressive learning through creating an online educational program based on material produced in the T-Labs which each initiative would hold each year. See this blog for more information on the T-Lab in Atánquez. 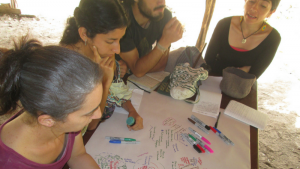 As per the agreement in atánquez, throughout 2017, initiatives have been holding T-Labs in their respective fields (individual reports to be complied by the end of 2017). The opportunity arose, however, to meet and participate in the T-Lab taking place in the Ecovillage Aldeafeliz, based on the rebuilding of their Casa de Pensamiento located in the community, which they call the Cusmuy. 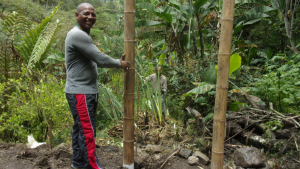 During four days, co-researchers met to compare experiences for their t-Labs, reflect on what T-Learning really means, and discuss strategies for networking with other initiatives. Important for this workshop was that we participated in the minga (collective workparty), of rebuilding the cusmuy: With spades we joined participants in digging a ditch around the foundation; with bamboo we built up the pillars of the structure; and with song we accompanied the (meta)physical rebirth of the cusmuy and the community of Aldeafeliz.

Through a dragon-dreaming exercise of collaborative definition making, we reflected on what different t-Learning terms mean, coming up with our own co-defined definitions. (see this blog for how this methodology works in practice). The following is one example:

Co-definition of what a T-Lab is: “T-Labs are pedagogical processes of restoration and potentialisation of sociocultural tissues in territories. They are developed in living, diverse and intercultural learning spaces giving new reference points and regenerative tools” (originally in Spanish: “T-Labs son procesos pedagógicos de restauración o potencialización del 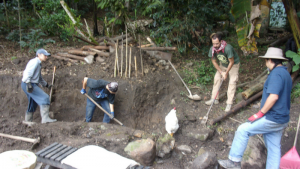 Interestingly, as a group we were unable to produce a shared definition for Transgressive learning. While some co-researchers liked the term, others felt it was too aggressive a term for using in fragile community settings, while the point was also made that the term is unknown, and has little practice use in community settings. We had an interesting discussion on the importance (and limitations) of language, where the idea came forth that in a community setting the word transformation is useful, while in an academic arena the term transgressive can play an important disruptive role. 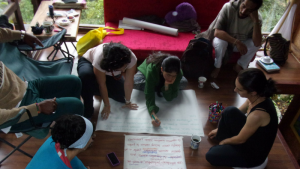 Leading an action research project is a rewarding process as it gets one directly involved in change-based processes, and forges deep connections between co-researchers. However, it is very demanding in terms of time for the lead researcher who is overall in charge of the project. Time-wise it can also be demanding on co-researchers, most of whose work is voluntary. These challenges were manifested in the original idea of the project to work through bioregions, whereby each co-researcher would lead regional processes of learning, networking with other initiatives in their surroundings. It became clear over time, however, that this would require more time and monetary resources which the project does not have. Instead, it was agreed upon to work at the community level, focussing on the T-Labs, with future projections to explore processes at the bioregional level.

Another issue that emerged during a zoom meeting was the need to produce more visual material that can be disseminated through social media. Up until now, most material has been in the form of reports, which take a lot of time to write and translate, and are difficult to share with a wider audience. It was therefore decided that more material will be produced and shared through videos made by co-researchers, with editing (and analysis) being carried out by the lead investigator.

On a personal note, it has been very inspiring working with co-researchers – many of whom are leaders in their communities – and whom have many years of experience in building community and facilitating workshops. One aspect in particular which I am learning a lot from is the spiritual (silent) nature of their values and behaviour, which is relatively foreign to my worldview. For example, Andres from Colectivo Talanquera shared with us the Indigenous practice of rubbing small balls of cotton with our fingers, imparting all our positive and negative energy into the cotton which was then ‘planted’ into the earth as an offering. Despite having participated in many rituals such as this one, I still struggle to move away from the cognitive level of these exercises, to really give myself up to ‘heart’ based consciousness which underlies our actions and thoughts. As the late Colombian sociologist Fals Borda has noted on PAR, the researcher goes through a process of decolonization from the dominant expert-based institutional logic. I feel like this research is exactly that.